- Madonna appeared in small roles of some flop movies.

- Madonna and Cyndi Lauper and a few other people made a disco band called Mythological Ageism. First album Glitter Light (1978) did well, while Sepheryn (cover) became a top 5 hit.

- Second album Confessions On A Dance Floor (1980) flopped. Its was criticized for being too disco in a time when disco became irrelevant. Madonna and Cyndi wanted to cover ABBA's song and said things could have been different. At this point the band broke up. Apparently Madonna and Cyndi wanted to go in different directions, but rumor had it that Cyndi was jealous of Madonna voice and couldn't take it anymore. 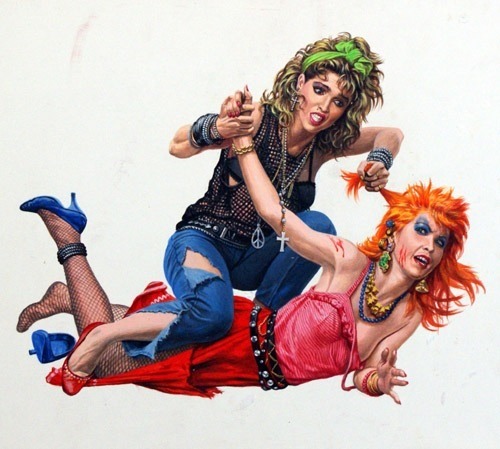 - In 1981 Madonna released American Dream. A conceptual new wave/pop rock about America being no.1  in world. The album flopped, while Madonna called it ahead of its time.

Critics said it was too cringe worthy and thought Madonna being patriotic was very calculated and a desperate cry for success. - In 1982 Madonna started to experiment and released a conceptual instrumental album called Impressive Instant. It didn't do well on charts, but critics praised its futuristic beats.

- In 1983 Madonna starred in Flashdance movie and also did a few songs for the soundtrack that were released as singles. The movie was a huge success, while singles What A Feeling, Into The Groove and Gambler became no.1s.

- In 1984, she got Oscar for her role in Flashdance and also a Grammy for What A Feeling.

- In 1985 Madonna released Hard Candy, a disco inspired album that became no.1 everywhere. Hit single Candy Shop was praised for its inventive production and smart bland of dance and sex  themes. Another hit single 4 Minutes  was praised for its serious theme and performed at Live Aid. The same year Madonna went on her first solo tour. - In 1986 and 1987 Madonna focused on her acting career. She did a few movies and all her roles got critical acclaim. Madonna gets an Oscar nomination.

- In 1989 Madonna released Rebel Heart. Critics loved it and called a perfect collection of brilliant pop songs. Ghost Town became an instant classic, while Living For Love was praised for its choir and gospel elements.

- In 1990, another RH single was released. Bitch I'm Madonna song was described as brave, provocative and game changing. Its video became iconic for Madonna's introduction of a new dance trend: twerking. The same year Madonna released her first compilation called Celebration, with a new song Keep It Together. The compilation did well and Keep It Together was a no.1. In Zimbabwe the single was released with a bonus song called Vague. A second tour, Veni Vidi Vici, became iconic and groundbreaking. Madonna was the first artist who changed her costumes. She also did it in front of the public sometimes. Madonna got banned in Toronto for exposing her thong while singing Hold Tight. - In 1991 Madonna met William Orbit. They married the same year. He produced her new album MDNA.

- In 1992  MDNA album was released. European trash house dance acid rock  inspired single Girl Gone Wild became a no.1 and influenced the music world. A ballad Give Me All Your Love ( a duet with Vanilla Ice) appeared on The Bodyguard soundtrack too. Madonna wanted to tour, but changed her mind, when she got pregnant and gave a birth to a girl called Lola. - In 1994 enlightened Madonna released a new album Bedtime Stories. It was a collection of lullabies for children and was dedicated to Lola. Madonna also released her first book from a hit series Harry Potter. Madonna was praised for her new reinvention and for making kids read instead of doing drugs.

- Madonna wanted to act in a new movie called Evita, but the director chose Courtney Love for the main role. Disappointed Madonna started to work on a new album called Like a Prayer. It was a second collaboration with Orbit. The adult contemporary album was released in 1997 and flopped. Madonna blamed Orbit and they got divorced. - The comeback in 2001 : Madonna did vagina rejuvenation and released Like a Virgin album. The album was a big hit, just like its singles (Like a Virgin, Material Girl, Dress You Up, Hey You). Madonna was praised for exploring new themes like materialism and innocence.  She was also called a new force of conceptual art.  Virginity tour was a success and Madonna performed all her iconic hits. - In 2002 Madonna released Erotica, which became her best selling album (40 million copies). She was praised for her new conceptual work that talked about a frigid cyborg who desperately wants an orgasm. Thanks to a hit single Sexpress Yourself (a song about sexpressing yourself and not being a hoe), Madonna became a feminist icon. Erotica and Waiting (For Isaac Asimov) were top 10 hits, while Secret Garden peaked at no.84. - In 2003 Madonna released Sex book as a response to George Bush. A book with sexy photos of Madonna's madgina, Britney, Xtina, Justin Timberlake, Backstreet Boys and Oprah. Madonna shocked the world. People were destroying her Erotica CDs. People called Madonna old and a traitor. George Bush claimed he didn't get Madonna's intention, but he liked the book. - In 2006 Madonna released a self titled album. Madonna album, inspired by the 70s disco, was a new comeback. Everybody and Lucky Star were no.1 hits. Madonna also released an autobiography called Lucky Star. - In 2010 Madonna released her second compilation, Immaculate Collection that contained her most important songs.

- In 2012, while  working on her new album, all her songs in their demo versions leaked. The same year Madonna released her album  titled True Blue as a reference to her emotions during leak gate.

- In 2013 Madonna and Lady Gaga formed a pop duo called Goga and Magoga. Their album Iconic flopped. Critics called it "Fiesta del failure" and "An epic fail of epic stars". - In 2015 Madonna stated that she thinks that leaking is the future of music.

Madonna is currently working on a new album. Rumor has it that one song is called Donde Estas Los Hit Makers? and has been described as a new La Isla Bonita.