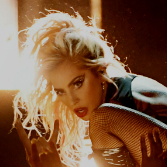 Ryan Murphy: "Gaga improvised the last line" ("Your boy has a jawline for days")