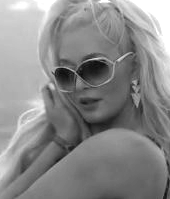 Omg I get it. As if she's not whoring it up everynight like a professional sex worker and sex is like 2nd nature to ha.