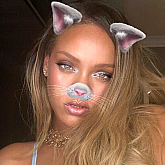 I have no hate against Katy, but I cannot figure out for the LIFE of me the huge hype behind the song Witness. Katycats make it out to be the saving song of 2017. A pop masterpiece. A defining song fo