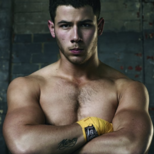 Whether she really is bisexual or just said it to be a part of the club, it's kinda irrelevant.   She is still a white woman singing mainly about men and relationships with men and she only