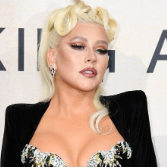 I found the first Species kinda on the boring/underdeveloped side and I actually haven't seen III  Species II I thought delivered on the premise more than the first film did.

I stan Creature From the Black Lagoon.